Jon Watts, Executive Director of the Project X Institute discusses the opportunities and challenges threatening TV video advertising in the 2020’s and what needs modernising.

The TV and video industry is clearly in the midst of a grand transformation. It's a very incomplete transition, but we're clearly heading towards a much more complex multi-platform video market, one in which TV and video is consumed across a plethora of devices and platforms, both linear and on demand. For advertisers and audiences this is going to create lots of new opportunities; opportunities to create new types of ad products and formats, opportunities to reach audiences in different ways and, opportunities to increase and improve the effectiveness of advertising.

So, let's have a look at some of these opportunities in a bit more detail - but before that context! How much has really changed? 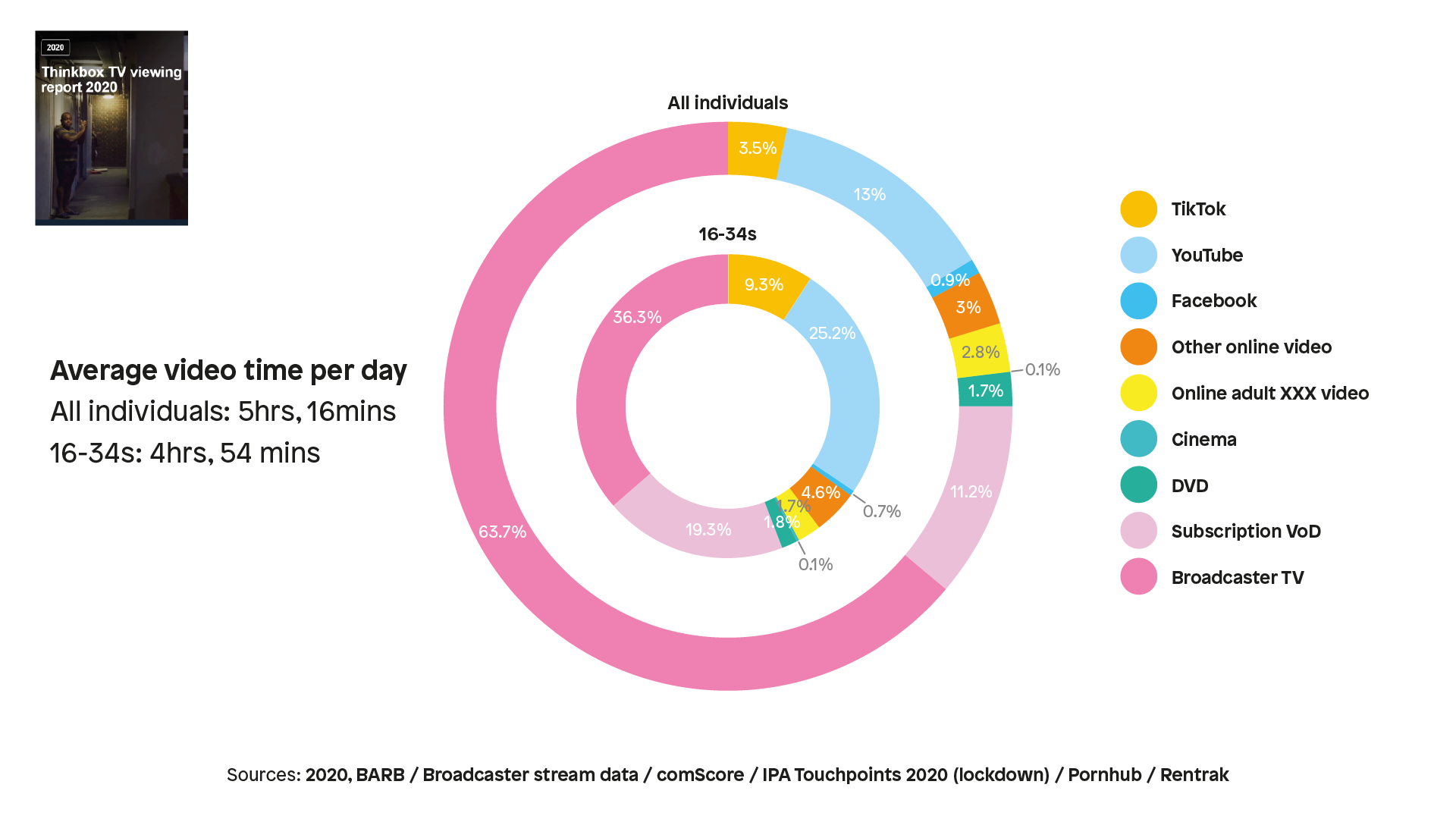 The graph above shows all video consumption in the UK during last year 2020, a year of lockdown during which the pandemic drove up levels of video viewing. And what's interesting, is that despite all of the change of the last two decades or so, TV has retained its really strong position.

Almost two thirds of all viewing across all audiences is still for good old fashioned TV, with BVOD and Catch-up making a good proportion. TikTok is also worth pointing out, which owns a staggering 3ish% of video consumption from almost nothing five years ago. For younger audiences, of course, viewing has changed very, very quickly and the accelerating rate of change is perhaps the most interesting. 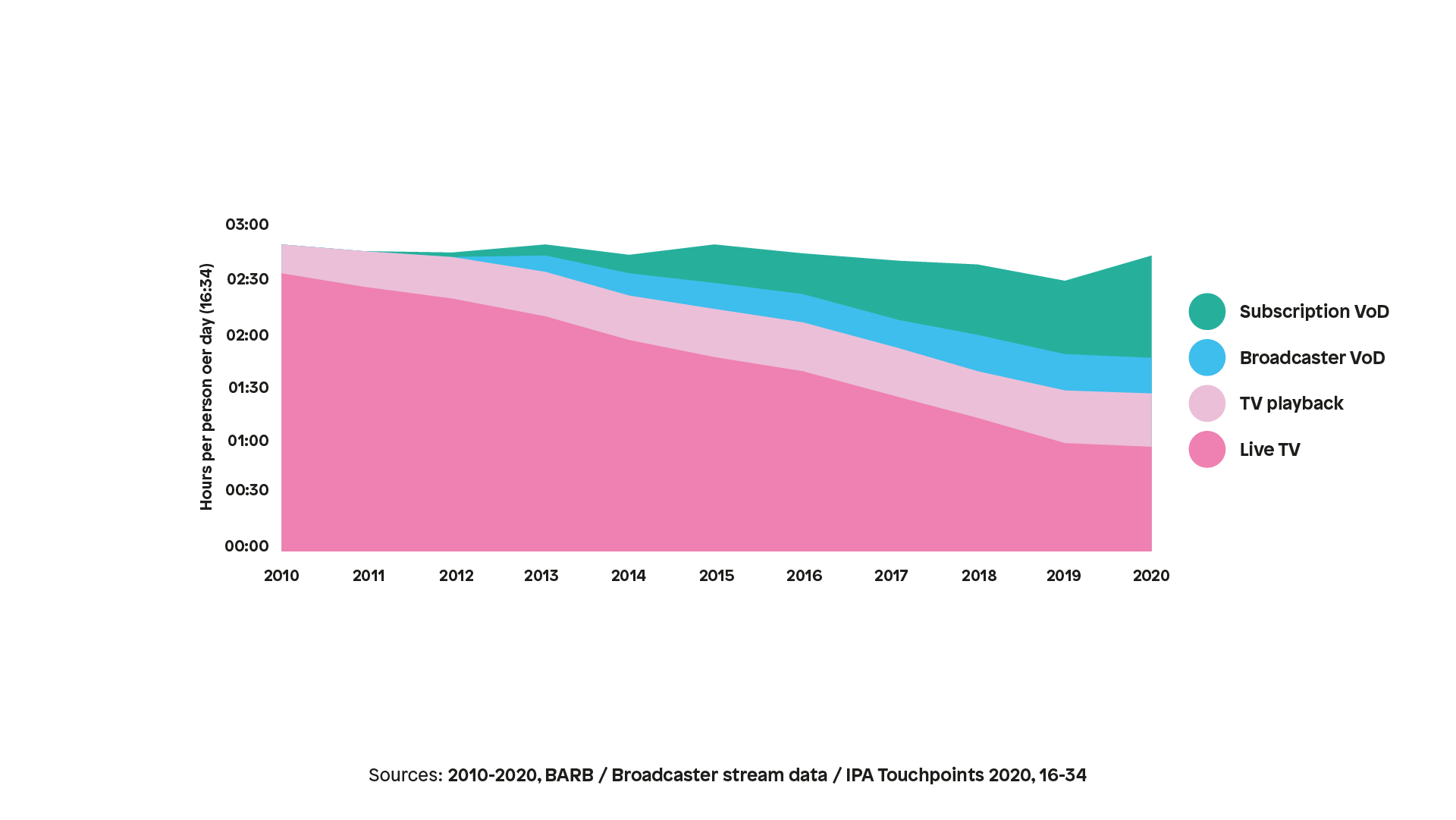 If you look at the last five years in the graph above, there's been more change than almost the previous five years by some distance. TV viewing is now being much more widely distributed across different platforms and younger audiences are really at the forefront of that change.

Smart TVs are one of the big drivers of that change. They’re an interesting platform because firstly, they scale very quickly. If you look at the UK, where about 10 million TVs are sold every year, this means that as of 2019, almost 50% of all UK TV households had a connected Smart TV. 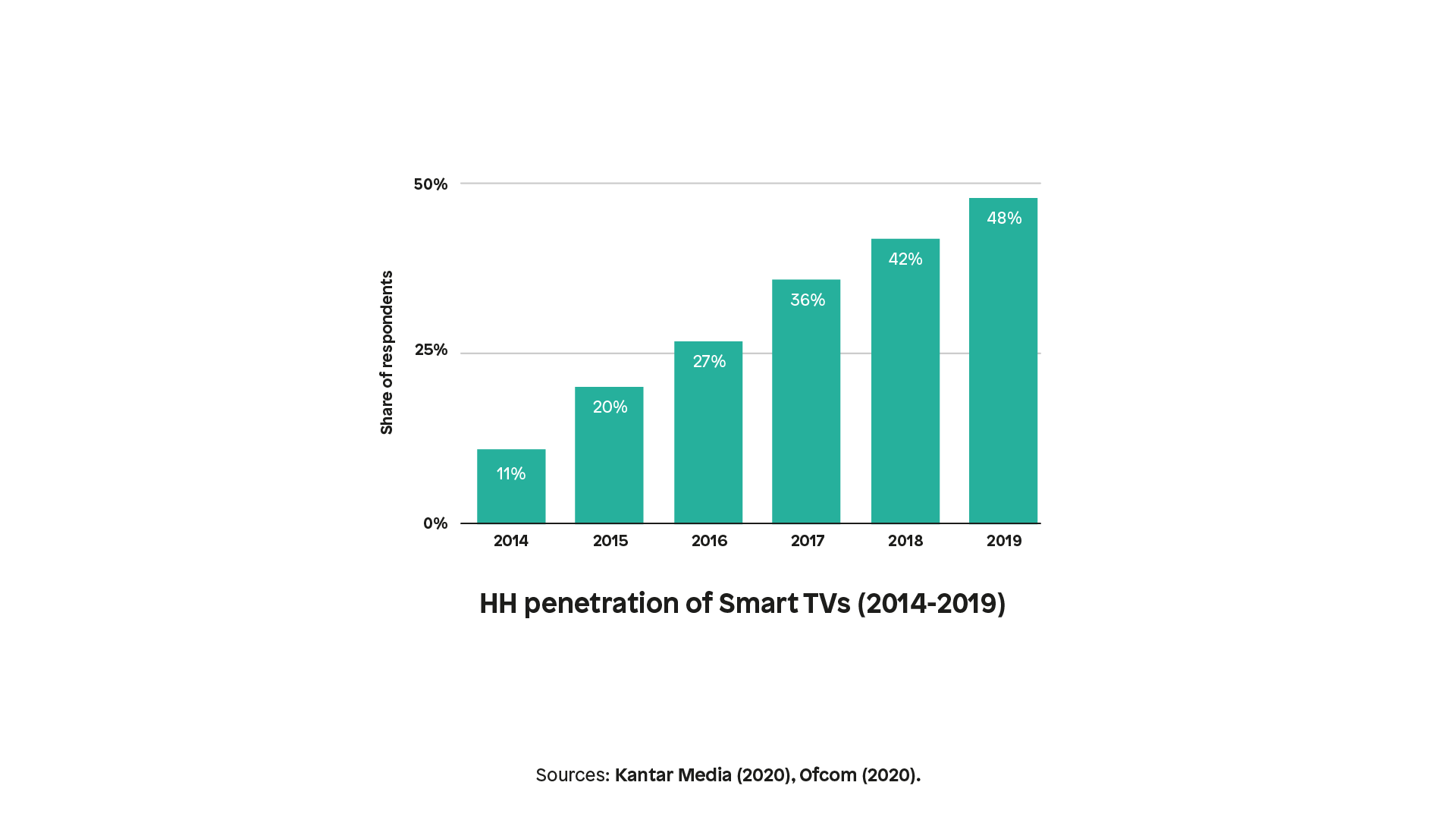 Smart TVs also dramatically increase the range of content available to consumers, hence all the changes in viewing. As well as the traditional linear channels, viewers now have access to BVOD services and YouTube. Big TV original equipment manufacturers like Roku and Samsung have also scaled out their own channels. Finally, lest we forget the game-changing SVOD services like Netflix, Disney +, Now TV and Prime.

Most consumers have a lot more choice and they're exercising that choice, hence the changes in viewing I spoke about earlier. The exciting thing about connected devices is that they enable really interesting new opportunities for advertisers. And there are at least five different categories of opportunity that I think are worth stressing:

Specific audience targeting: It's now extremely possible to target quite distinctly and tightly defined segments in ways that simply weren't possible before.

Programmatic: The new ecosystem that is taking shape around smart TVs allows us to transact with video inventory in very, very different ways, which allows for TV trading model to be transformed - potentially.

Data: It is becoming a much more data enabled medium. You can apply data to the inventory and use that to provide much more precise forms of measurement, attribution and targeting.

Advertising innovation: Connected devices are a platform for advertising innovation, both in terms of new formats but also that you can have controlled experiments. You can test a campaign against a small subset of your audience, check results and potentially even optimise a campaign in flight, which is a really exciting new development.

Of course, with all of this change, and particularly given the pace of change, there are some pretty significant challenges as well. So it's worth just talking through those so we will have a clear picture of what you have to grapple with now.

Fragmentation: TV is becoming much more fragmented. So many, many advertisers are looking to reach audiences at scale and to build, reach and cover quickly. But for certain audiences, especially 16 to 34's who, as we saw earlier, have changed their viewing. It's getting much more complex and expensive now to build out that reach and cover, there's fewer of them spending time of linear television, and that means the price of a campaign of hitting those reach and frequency metrics is higher. 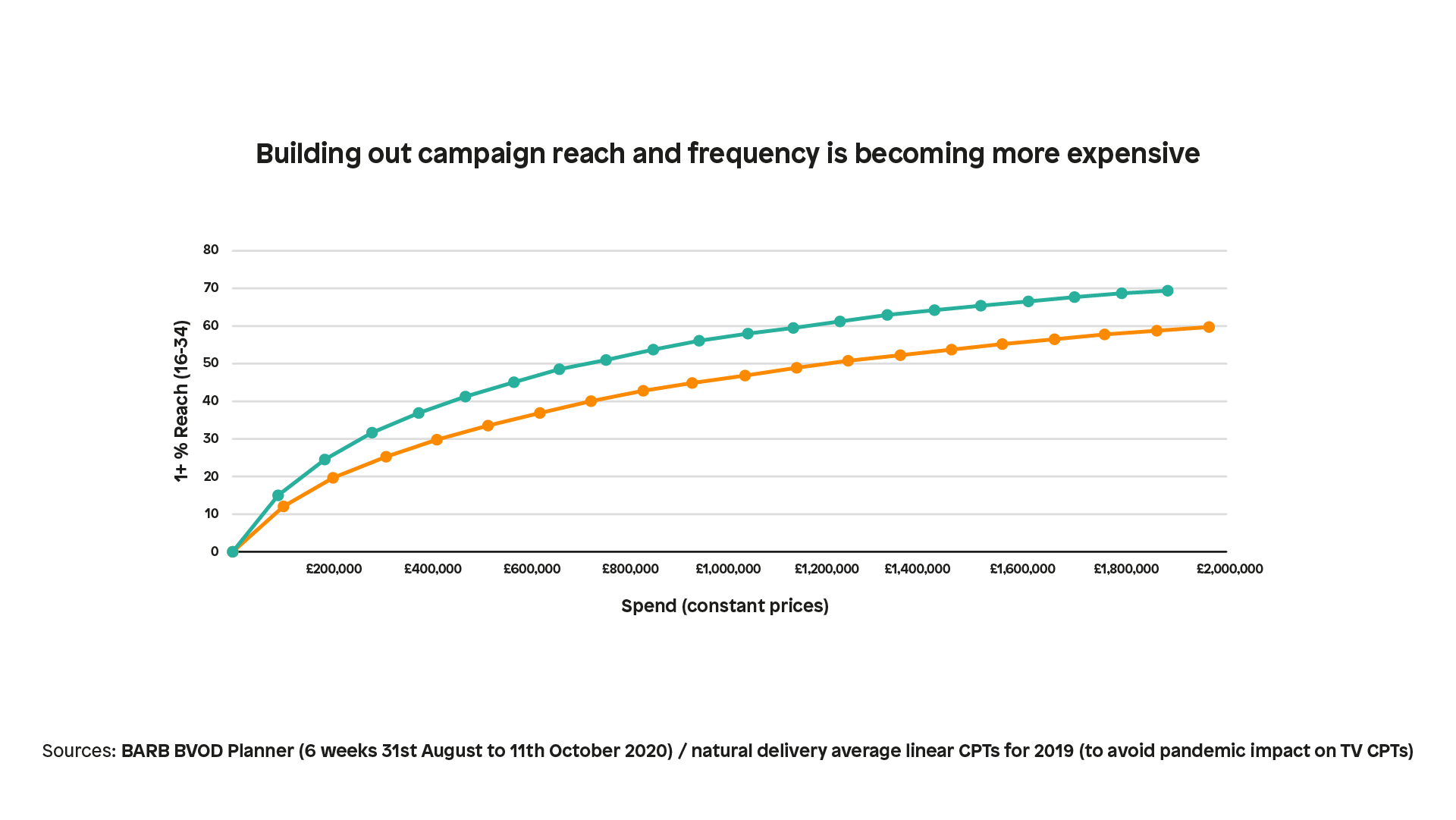 Difficult to measure success: The main currencies that are responsible for driving the purchasing of TV such as BARB, for example, are fragmenting and becoming more complex in terms of what they measure. So this graph shows the number of occasions in each of these given years when the most viewed thing in that 9:00 p.m. slot was unmatched enough where BARB couldn't tell us what was actually being viewed. It was a long tail of YouTube, Netflix, gaming and other things. And the scale of this change, when you look at the last few years, is significant. TV audience measurement providers across Europe are racing hard to address this problem, but there's still work to be done to get us there. 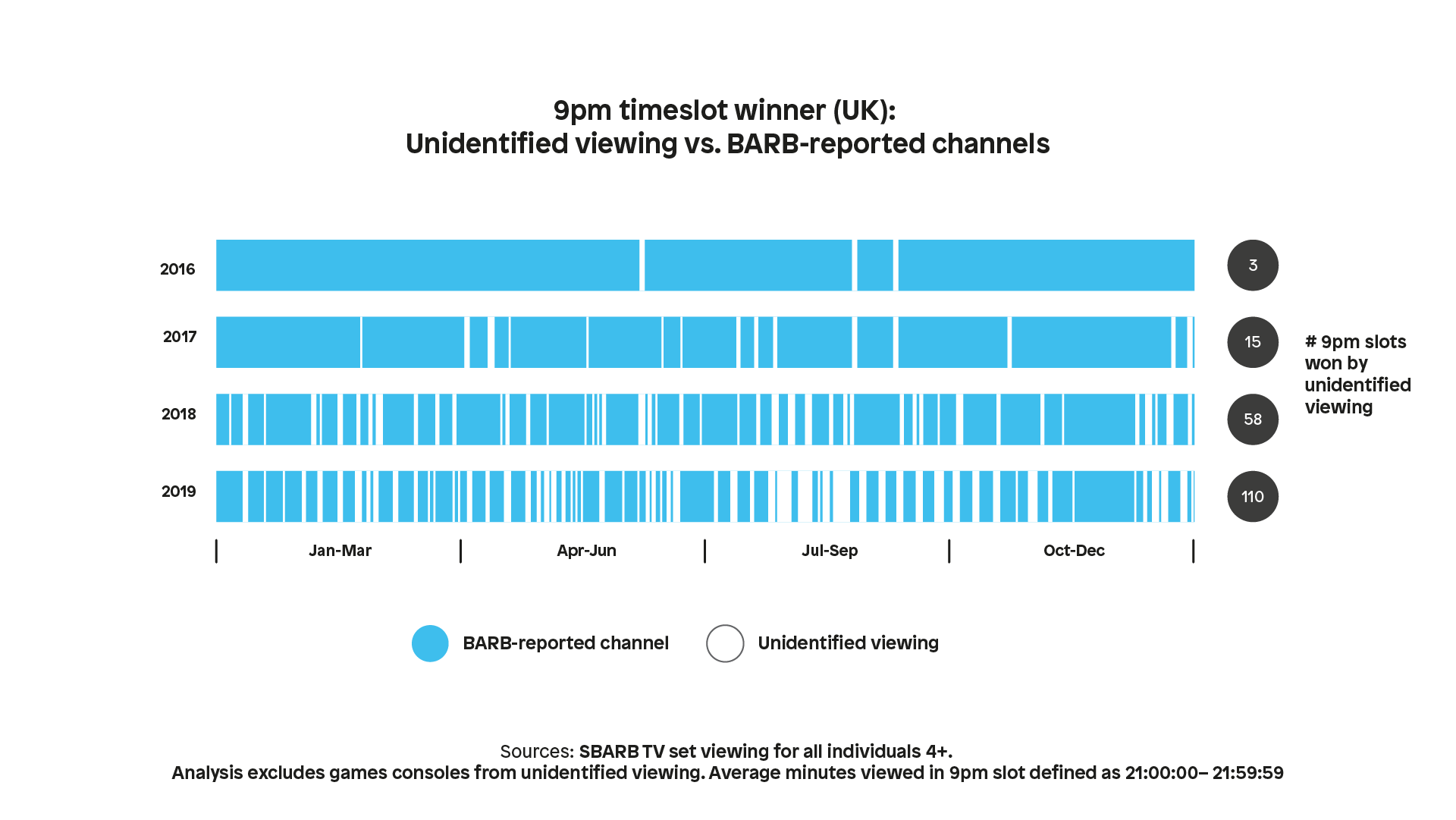 Overall increased complexity: The next problem really is data and dealing with innovation. Excitingly, if you want to deliver a campaign now across TV and then other devices to the same audience, it's increasingly possible to do so. But doing so is difficult. It requires mapping out device graphs and relating households to individuals, to devices, so TV, becoming a much more complex medium.

This complexity means broadcasters will have to recruit large teams of analysts and put in place tech and data platforms they did not have to worry about before, which is a real step change for the industry. It also means, and perhaps most importantly that the volume of creative assets is increasing very dramatically. 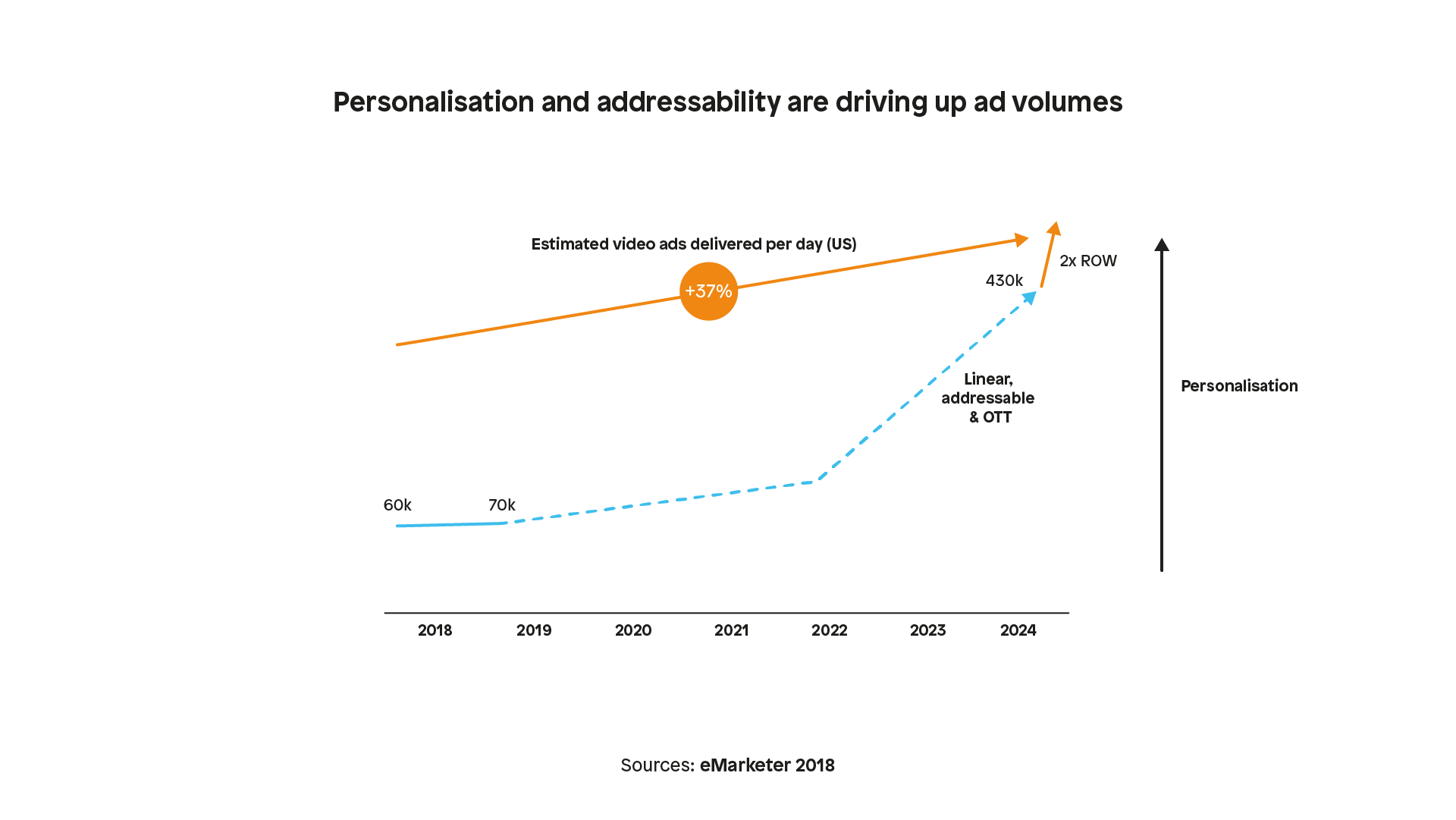 The graph above is of the US, and shows really significant growth in the number of video ad units that are being delivered to a typical person in a given day. To take advantage of addressable and personalisation you need a lot more video. You're going to deliver different videos to different audiences, and that means workflows are going to have to deal with a much greater volume of assets and it means additional complexity especially when trying to optimise in flight.

Given all of this change, both the opportunities and the challenges, there are probably four priorities for the industry if we're going to really unlock the full potential of these developments during the twenty twenties.

Addressable at scale: Addressable is rolling out very different speeds in different markets, but in almost every market, it's a relatively fragmented medium. There are different ways of doing addressable TV and video advertising. And that means for the buyside, there's lots of transactional pain. It's not easy and straightforward to buy consistently across different pools of inventory. We have to fix that problem.

Data enablement: There is a lot of data out there, as I mentioned, but unfortunately not all data is good data. Data matching in clean rooms, for example, or taking a marketer's first party data and using that data to define the addressable audience is often very complex. It could benefit from standardisation and lots of it.

More standardisation: We have to see more standards in terms of the way the industry is rolling out new products and services. Many of these are delivered by big TV groups with big budgets, big development teams. But it is often the case that they're not working with other parts of the market.TV is always been quite a standardised medium, but is becoming less standardised, and that's something that has to change.

Workflows: Agencies, both buy side and sell side companies, have to start taking advantage of automation to improve the efficiency of their businesses.

If they're to take advantage of all these opportunities and deal effectively with both data and all these video assets. If all of this happens, the industry is in a good place for the 2020's, but there is definitely work and investment still to be done.

Watch Jon speak about how TV is still relevant in the video below: